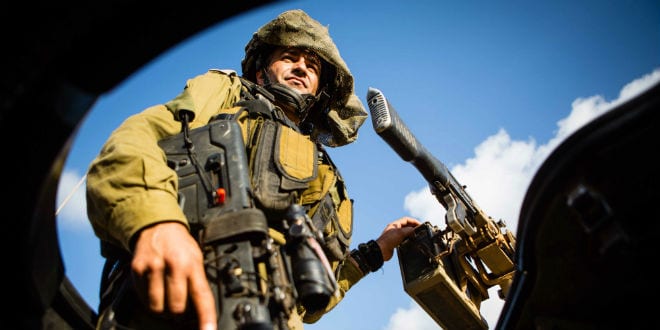 Prior to last week’s tragic terror attack in the Tel Aviv Sarona Market, Israeli citizens had finally been able to lower their guard and breathe a sigh of relief as things seemed to have quieted down from the near constant terror attacks plaguing the Holy Land since October. However, Brigadier General Yehiel Gozal, CEO of The LIBI Fund, the only official fund of the Israel Defense Force (IDF), told Breaking Israel News that the respite is not due to a lessening of Palestinian terrorist desires to murder Jews but rather to the outstanding efforts of the Israeli army.
School Status for Whatsapp

“We are now witnessing the results of the very hard work of the Israeli Army to stop terrorism,” Gozal told Breaking Israel News. “The improvements in the general security situation in Israel which we are witnessing, especially around Jerusalem and Hebron, is credited to tremendous coordination between the army and various security teams.”

Since the “Stabbing Intifada” began in October 2015, Israel has increased efforts to gain intelligence about terrorist intentions. IDF combat units, infantry, undercover “Duvdevan” units, and special forces are all working together with security agents and the police to stop what many felt was nearly an unstoppable uprising.

Though the attacks have not stopped completely, the dramatic drop in their number can be attributed to the IDF’s behind-the-scenes work.

“The army has a noticeably greater presence of combat units in Arab villages as well as in Jerusalem, Hebron, and in areas where Jews are living in Judea and Samaria,” Gozal noted. “This has sent a clear message to terrorists that we know what is going on and what they are planning. They are recognizing that we are on top of things, which is having a positive effect on Israel’s security.”

These heightened army activities have brought increased efforts on the part of LIBI USA to ensure that IDF soldiers have all of their physical and emotional needs met. LIBI USA provides for soldiers needs which fall outside of the army’s budget.

“Though it is easy to feel that ‘no news is good news’, LIBI acknowledges that Israel’s calmed down environment is due to the extreme efforts of the IDF,” said Dr. John A.I. Grossman, Chairman of LIBI USA, to Breaking Israel News. “Those added efforts come with additional stress on our soldiers and more needs calling for fulfillment.”

As more soldiers are serving out in the field, the need for care packages has increased exponentially. Volunteers are regularly delivering LIBI sponsored toiletry kits which thoughtfully include some extra tasty food treats. “Soldiers often do not have the opportunity to return to base to get cleaned up,” explained Grossman. “These packages are crucial for their well-being.”

In the past three months, LIBI has also upgraded and added recreational clubs for IDF soldiers. “Under such stressful circumstances, it is important for soldiers to have a nice place to relax and unwind,” continued Grossman. “We also sponsor weekly BBQs for soldiers. This is another way that they can destress from their service.”

Finding that more and more soldiers are struggling financially, LIBI has increased their  distribution of shopping card vouchers. “These are not only going to lone soldiers but are now also being given to soldiers who fall into a ‘grey’ area – soldiers who do not clearly fall into a ‘needy’ category yet require assistance.”

In addition, Grossman pointed out that more soldiers are guarding Israel’s security through “pillboxes”. Pillboxes are concrete towers equipped with loopholes through which soldiers can fire weapons. Every military position in Judea, Samaria and Jerusalem has a pillbox. LIBI is now outfitting these towers with a small kitchen, coffee facility and a place for soldiers to relax.

“Based on coordinated intelligence and the IDF’s expanded presence, the army has experienced more success preventing terror attacks,” Gozal proudly noted. “Though nothing is 100 percent and everyday things can change, like we saw with the Tel Aviv attack, we thank God that we are not hearing about terror attacks on a daily basis. This is proof that the IDF is doing a great job.”

“And, that great job requires us to do what we can to ensure that our soldiers feel cared about and that they are not alone in their hard work,” added Grossman. “LIBI is doing all we can to keep up moral and help IDF soldiers succeed in their missions.”