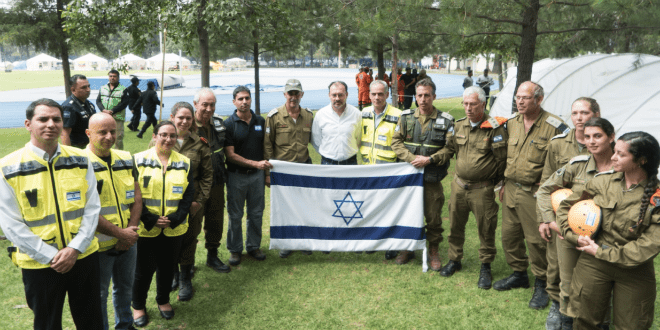 The 71-member team from the Israel Defense Force (IDF) sent to Mexico City after a devastating earthquake is returning to Israel in time to celebrate the holiest day on the Jewish calendar: Yom Kippur. The delegation was sent to Mexico to help find victims buried under rubble, check the stability of buildings and provide medical care, if needed.

“We are proud of the dedicated team of Israeli soldiers who left their families and Israel on the eve of the Jewish New Year (Rosh Hashana) in order to help those in need and save lives,” expressed Dr. John A.I. Grossman, Chairman of LIBI USA, an organization which supports IDF soldier welfare. “The Mexicans were visibly grateful for this help and Israel looks forward to continued warm relations with Mexico.”

The IDF team spent the week in Mexico City looking for trapped survivors buried under rubble and surveying buildings damaged by in the deadly earthquake. Thus far, it is estimated that at least 400 people have been killed by the disaster.

Earlier in the week, citizens of Mexico City applauded the IDF soldiers as they walked through the streets. In addition, a heartfelt “thank you” and farewell ceremony was held with dignitaries and the IDF soldiers in attendance.

Following the Mexican government’s request to Israel for assistance, Israel sent the IDF team within 48 hours of the earthquake. The Israeli delegation was one of the first foreign groups to arrive, touching down on September 21, the date of this year’s Jewish New Year.

“In Judaism, saving lives takes precedence over all other commandments,” explained Grossman. “IDF soldiers serve 365 days a year saving lives in Israel and, when needed, abroad.”

It is reported that the IDF delegation is leaving Mexico City with most of the enormous city having functioning electricity, water, and public transportation. Mexican President Enrique Pena Nieto said in a statement Wednesday, “I hope that in the new year we will be able to have also a new Mexico, rebuilt and in normal conditions.”