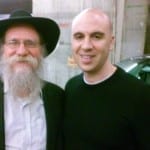 Recognizing the need to not only help IDF soldiers fighting on Israeli turf but also to educate people outside of Israel about the challenges the Jewish State faces on a daily basis, both from enemies and skewed media reports, LIBI USA partnered with Chabad on Campus International and Our Soldiers Speak to bring first-hand accounts from an IDF soldier to campuses and communities around America.

“LIBI USA is excited and proud about how well this speaking tour went,” noted Dr. John A.I. Grossman, LIBI USA Chairman, to Breaking Israel News. “The feedback from this program has been overwhelmingly positive in spreading a good and truthful light on our IDF army and heros.”

IDF soldier Sgt. Benjamin Anthony, founder and CEO of Our Soldiers Speak, a non-profit organization, was the guest speaker at the Chabad on Campus Student Leadership Conference held in New York City in October. This is one of the largest gatherings of Jewish students outside of Israel.

“I wanted to thank Chabad on Campus and LIBI USA for sponsoring Sgt. Benjamin Anthony to come speak at City College,” wrote Yehuda Shmotkin, the director of Chabad at the college, after the event. “It was a pleasure working with the staff at Our Soldiers Speak – coordinating the security and logistics of the event. We had a beautiful crowd of 45 faculty and students joining for the lunch and speech. His words were very much enjoyed by everyone and gave everyone walking out a sense of pride and conviction in the Jews ownership of the land of Israel. His personal stories were touching.”

Anthony is the lead lecturer for Our Soldiers Speak, which has reached diverse audiences at more than 300 campuses across several continents as well as leading think tanks in various countries. A graduate of the University of Manchester in the United Kingdom, he has lectured before students at every Ivy League college and has been a keynote speaker for Israel Bonds, CAMERA, CUFI and numerous Jewish Federations as well as some of the most prestigious synagogues around the world.

As a veteran IDF sergeant, he was in service during the Second Lebanon War in 2006, Operation Pillar of Defense in 2012 and Operation Protective Edge in 2014. He also did many stints in Judea and Samaria and along Israel’s northern border. His army experience makes Anthony an excellent representative of the IDF’s hard-working soldiers.

“Sponsoring these lectures was an excellent extension of what LIBI USA strives to achieve,” noted Grossman to Breaking Israel News. “IDF soldiers need our support financially, emotionally and spiritually. Getting the word out about the IDF in a personal way achieves all of these goals.”

The fact-based seminars in which Anthony participated helped to educate college students who are bombarded with anti-semitic sentiments about Israel’s conflicts, military campaigns and defensive operations.

“Students on campus are often exposed to views that oppose anything related to Israel,” Rabbi Avi Weinstein, Director of Administration of Chabad on Campus International, told Breaking Israel News. “Giving students the opportunity to hear first-hand perspectives from someone who was personally involved on the ground is so important.”

To that end, the organizers received many grateful letters from students who participated in the programs. One student shared, “It was refreshing to have a speaker who is interested in more than apologizing for Israel, and it is an opinion which the embattled supporters of Israel on campus need to hear.”

Alex, a college senior from Rhode Island, wrote, “Hearing [this] presentation encourages me to be a better advocate for Israel!” Another student wrote, “He was great! Powerful, very well informed, articulate and emotional. I would totally recommend him.”

For those who would like to invite an IDF soldier to speak at your school or organization, please visit the LIBI USA website here.