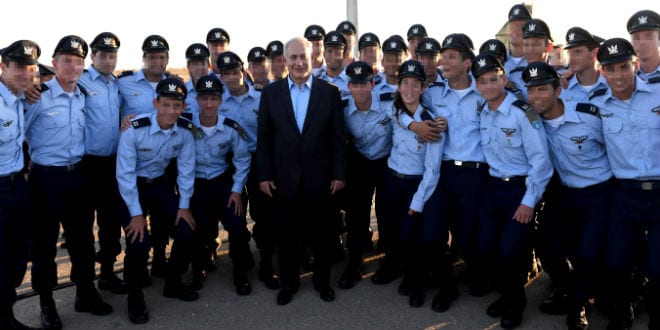 The Israeli Air Force Flight Course graduation ceremony held at the Hatzerim Air Base in the Negev desert. June 29, 2017. Note: Faces are blurred to protect identities. (Photo by Haim Zach/GPO)

The Israeli Air Force Flight Academy just welcomed its latest graduates. These include one out of seven students from Hesder Yeshivas, a program which combines advanced Bible studies and military service.

“Over the years, we have seen an increase in religious soldiers joining and succeeding in the Israel Defense Force (IDF),” noted Dr. John A.I. Grossman, Chairman of LIBI USA, the official welfare fund of the IDF. “This is another feather in the cap for both observant Jews and Israel’s army. Both can succeed. Both need each other.”

The IDF spokesperson announced that 14 percent of the most recent Air Force graduates managed to actively engage in Bible studies while earning their flight wings.

While Israel has a required three-year conscription for men, those who choose the Hesder Yeshiva route dedicate five years of their life to the combination of Bible studies and defending the Land and people of Israel. Of those five years, 16 months are dedicated to army training and active duty. Generally, soldiers who serve in the IDF through the Hesder Yeshiva system become combat soldiers.

Yehuda Amital, originally from Romania and a Holocaust survivor, is credited with creating the idea for the Hesder Yeshiva system. Amital, an Orthodox Rabbi and Israeli politician, served in the Haganah (pre-IDF army) and fought in Israel’s War of Independence. He published an essay about the religious and moral aspects of military service, sharing his vision for a program which combined army service and Bible study.

The first Hesder Yeshiva was was established in 1953. In 1991, the program was awarded the Israel Prize for its special contribution to society and the State of Israel.

“As more and more of Israel’s soldiers align with religious observance, LIBI USA strives to fill their special needs, which fall beyond the army’s budget,” continued Grossman. “In fact, we are launching a program to distribute Bible commanded tzitzit [special fringed garments] to soldiers in need.”

Israeli society recognizes that becoming an Israeli pilot is the highest and most difficult path of army service. In fact, only 15 percent of this year’s cadets received their wings.