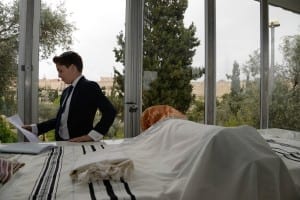 A self proclaimed “Jew and Zionist”, 13-year-old New York City resident Gavin Mitchell asked his friends and family to donate to the Israel Defense Force (IDF) through LIBI USA in lieu of his Bar Mitzvah gifts.

Bar Mitzvah literally translates as “son of commandment”. It refers to the coming-of-age ceremony celebrated by Jewish boys at the age of 13, and symbolizes a young Jewish man taking on observance of Jewish ritual law, tradition, and ethics. Most Bar and Bat Mitzvahs are celebrated with a large party and lots of gifts.

Some young men and women, instead of accepting the gifts, choose to turn their rite of passage into an opportunity to help others.

“We greatly appreciate Gavin’s generosity towards our Israeli soldiers,” expressed Dr. John A.I. Grossman, Chairman of LIBI USA. “We were touched by this selfless act which reflects the selflessness of our dedicated soldiers towards the defense of the Holy Land.”

Before Gavin’s Bar Mitzvah, the Mitchell family set up a webpage explaining that LIBI USA was chosen as his “mitzvah project” because it “works on behalf of the Israeli Def

ense Force with services that contribute to the security of the State of Israel and those that fight to protect it.”

Much of Gavin’s funding went towards adopting the “Black Snake” Israel Air-Force squadron through the “Adopt a Battalion” program. The “Adopt a Battalion” program began eleven years ago as a way to build an extraordinary bond between IDF combat soldiers and citizens who care. Combat units are adopted by companies or sponsors who have earmarked 100,000 NIS ($26,000) annually for three years towards the welfare of soldiers.

“In today’s world, the importance of the Black Snake squadron is golden as it is vital and strategically significant to the IDF,” shared Grossman.

“Though most of its operations are censored and not known to the public, Gavin wanted to provided both financial and emotional support to this special team of combat soldiers.”

Those who adopt a battalion are invited each year to celebrate brigade milestones, share in recreational activities with soldiers, join in holiday festivities and more. “Adopt a Battalion is a great way to build a lasting and meaningful bond between supporters and soldiers,” explained Grossman. “Over 16 million NIS a year is donated to this important project making it one of the largest community service projects in Israel.”

LIBI USA has the responsibility of filling in IDF budgetary gaps. This is crucial for both the security of the State of Israel and the morale of Israeli soldiers. For example, last year, in honor of the 10th anniversary of the Adopt a Battalion, twenty mothers of lone soldiers were flown in as a surprise for their sons and daughters who had volunteered for the IDF.

As part of Gavin’s Bar Mitzvah celebrations, the family personally visited an Israeli army base. “Touring the army base was such an unforgettable moment,” Gavin shared. “The IDF represents the heart and soul of Israel and LIBI provides for the soldiers’ welfare. I am happy to back this organization and pray that the IDF will be successful in all of its missions and to support Israel.”

Grossman pointed out that there are still battalions waiting for adoption. “The Adopt a Battalion program represents the shared commitment of people to Israel and the Israeli army. We welcome individuals, groups and companies to join forces to support IDF soldiers and build personal relationships with Israel’s bravest.”