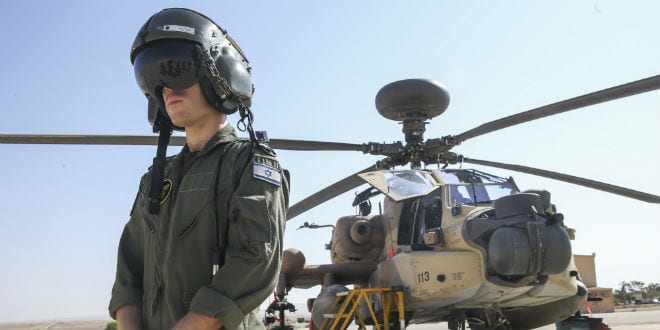 In a first-ever for the Holy Land, an Israeli Christian Arab has become an Israeli Air Force (IAF) cadet. Only 10 percent of cadets who begin the prestigious course earn their pilot wings. Yet, for this Christian Arab, whose name cannot be revealed for security reasons, just passing the rigorous medical, physical and mental abilities tests is a historic accomplishment.

“This is a proud day for Israel’s army,” stated Dr. John A.I. Grossman, Chairman of LIBI USA, the official welfare fund of the IDF. “While the international community continues to make false claims against Israel’s army, we see again and again how inclusive it really is.”

Only Jewish citizens of Israel, Druze and Circassians are required by law to enlist in the military. Israeli Arabs, Christians or Muslims serve voluntarily.

Recently and for the first time, a Bedouin soldier was promoted to Colonel. Previously, Druze cadets completed the pilots course and served as pilots.

However, Christian Arab military enlistment is still in its infancy. Many Christian Arabs live in Muslim communities where there can be deep animosity towards anything “Israeli” and certainly its army.

It was recently reported in the Mako Hebrew news that a Christian IDF soldier received death threats on his Facebook page from seemingly Muslim Arabs who oppose Arabs serving in the IDF. They wrote, “We know who you are, where you serve and where your parents live. When you finish your patrol of the old city, we will wait for you at the mosque, where we will stab you.” Other Christian Arabs who volunteer for the military have faced incitement and harassment, including being called traitors by Muslim Arabs.

Yet among calls for the state to prosecute agitators who threaten Christian soldiers, the IDF has witnessed an upswing in the number of Christian Arab soldiers serving for the past five years. Today, it is estimated that there are several dozen Christian Arabs in the IDF.

“The job of LIBI USA is to ensure the welfare of every Israeli soldier,” continued Grossman. “Our only concern is that those who give the best years of their lives receive what they need, whether physically, mentally, emotionally or educationally.”

Along with seeking an increase in Bedouin recruits, since 2014 the IDF has also sent letters to Christian Arabs encouraging them to enlist. However, since so many Christian Arabs live among their Muslim counterparts, the letters often do not reach their intended destination.

To improve this situation, the IDF and Defense Ministry plan to open small enlistment centers in Haifa, Nazareth and Ma’alot with hopes that these locations will ease the path for Arabs to enter the military.

Not only is the military good for the future of Arabs but having soldiers in the IDF fluent in Arabic is a significant perk. One Arab soldier noted that following basic training he served in the hostile Palestinian village of Jenin. “You can imagine how surprised they were when I spoke Arabic with them,” he said.

Arab Israelis make up around one-fifth of Israel’s population. Israel’s society respects those who serve and often gives preferential treatment when hiring to those who have served. Not only are soldiers considered more responsible and mature, they also gain a deeper bond with the Holy Land and feel more positive to the country.