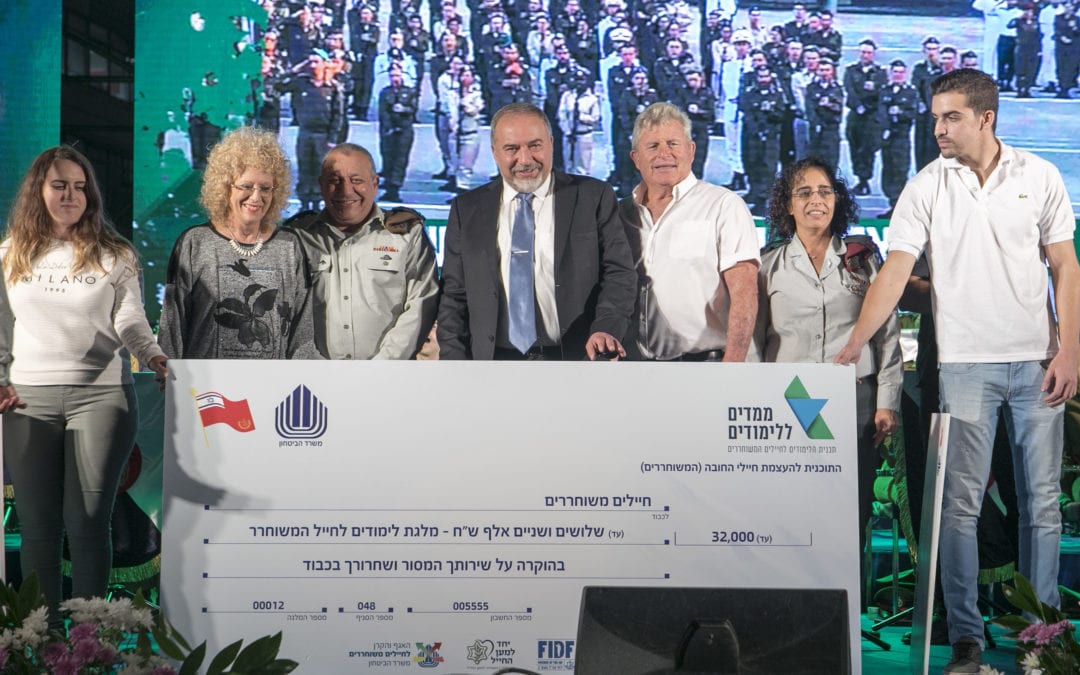 In a move expected to eventually cost 730 million shekels ($190 million) a year, the Israel Defense Forces (IDF) has officially launched their “Uniform to University” program for Israeli soldiers. The project, initiated by IDF Chief of Staff Gadi Eisenkot, will pay for the  academic studies of soldiers upon discharge from the Israeli army.

“This important project helps the Israeli army by encouraging youth to enlist, its soldiers to earn valuable degrees and Israel’s future in ensuring that its citizens can give back to society,” expressed Dr. John A.I. Grossman, Chairman of LIBI USA. “LIBI USA is strongly on board to help raise the funds for this important program.”

The first phase of scholarship distribution has begun with combat soldiers, immigrant “lone soldiers”, minorities and underprivileged service members receiving funding. Once it is in full swing, this stage will cost an estimated 230 million shekels ($60 million) a year. With prayers that the funds will be readily raised, the second stage of the program will include all IDF soldiers at an additional cost of 500 million shekels ($130 million) a year, making the yearly total cost 730 million shekels.

The new measure pays for two-thirds of soldiers’ education. The last third will be paid by post-military grants given by the Israeli Department of Defense. These grants have been given since 1949 to help Israeli soldiers pay for some of their college education, wedding expenses, opening a business or buying a home in Israel.

“Uniform to University” will allow soldiers to use the old grant to fund a third of their education costs. The remaining two-thirds of the costs will be funded through the new scholarship. Thus, in essence, the IDF is fully funding soldier studies.

The scholarships cover the cost of three years of professional or vocational schooling (the usual period of time for Israeli university students to get their degree). Those in longer pro

grams, such as medicine or engineering, will be eligible to receive funding for an additional year. The scholarships can only be used at institutes of higher education recognized by the State of Israel.

In October, the IDF began distributing the full scholarships to about 10,000 soldiers who had enlisted before 2013. By 2020, 40,000 scholarships are expected to be distributed. When full funding has been raised, approximately 120,000 men and women will be granted the award annually.

Recognizing the exponential cost of this program, Eizenkot asked Israeli Finance Minister Moshe Kahlon to help with the funding of this enormous initiative in order to include non-combat soldiers.

“Senior military officers have made this project a top priority,” said Grossman. “Not only will it encourage soldiers to complete their army service, it will also encourage young people to remain in Israel to get their degrees since the students must begin their studies within two years of leaving the army. This will help stem the tide of Israel’s ‘brain drain’.”

This revolutionary social plan approved by Defense Minister Avigdor Liberman fulfills a dream set forth by Israel’s first Prime Minister David Ben Gurion. At the project’s launching, Eizenkot reflected on Ben Gurion’s vision stating that the mission of the Israeli army is not only to develop fighters but also to build youth with moral character, cultural awareness and human values.

“The ‘Uniform to University’ program is an outstanding way to show appreciation to Israeli soldiers who give so much to the State of Israel and protect her citizens,” said Grossman. “The more Israeli citizens attain professions, the more they are able to build society and truly reach being the ‘light unto the nations’ that it is meant to be.”