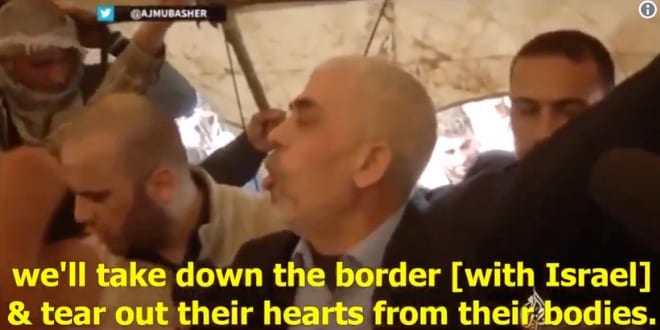 For almost a year, Israel has been contending with organized violence and military attacks led by Hamas on Israel’s border.

In the UN’s view, the “demonstrations” are “civilian in nature,” yet Hamas leaders at such demonstrations call on Palestinians to overrun the border and butcher Jews.

“We’ll take down the border and tear out their hearts from their bodies,” said a Hamas leader. What’s keeping them from doing just that? The border, of course, as well as IDF soldiers who uphold it.

The only @UN_HRC recommendation for Hamas was to stop "the use of incendiary kites and balloons." How about also recommending that Hamas stops inciting Gazans to breach Israel’s border to kill Jews?

The IDF tweeted at the United Nations Human Rights Commission, recommending that they take a stand against Hamas’ incitement.

While orchestrating the riots on Israel's border, Hamas was also responsible for firing over 1,300 rockets and mortars from Gaza into Israel during 2018. The number of times that this was mentioned in the @UN_HRC report? Zero.https://t.co/T9Uwp9Z2Bf pic.twitter.com/laszv8ys7l