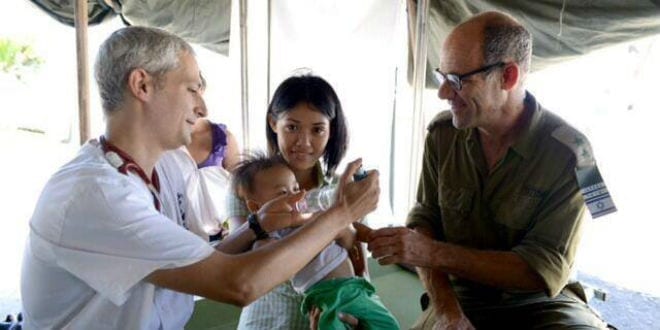 Dr. Ofer Merin (right) with a pediatrician from the IDF Field Hospital unit treating a child in the Philippines. (Photo: Courtesy of Dr. Ofer Merin)

When you hear on the news of Israel sending medical rescue delegations to disaster zones, the man in charge is Dr. Ofer Merin. Dr. Merin, the commander of the IDF Field Hospital Unit, has led medical rescue teams recently to Haiti, Japan, and the Philippines.  the gout diet & A cardiothoracic surgeon by training, head of the trauma unit at the Shaare Zedek Medical Center in Jerusalem and head of the hospital’s emergency preparedness for mass casualty program, you can find Dr. Merin walking the halls of Shaare Zedek during his regular day job.

Dr. Merin holds the rank of a Lieutenant-Colonel in the IDF as a reserve’s officer. For the past decade, he has headed Israel’s Field Hospital unit, which is comprised roughly half of reservists, half of active duty soldiers and numbers a few hundred in total. At least once a year, the team gathers and undergoes extensive training and refresher courses in preparation for a possible event. The goal is to prepare the unit “to come to an area in need and function as a multi-discipline hospital,” explains Dr. Merin.  First, logistics of setting up the actual hospital – from erecting tents, setting up electronic records, x-ray machines, and laptops to receive real time results of lab work – are carried out. Then, participants are individually assessed when it comes to their medical training. Simulated trauma scenarios, injuries, and the actual movement of the patients in the field hospitals itself are evaluated down to minor details. For those who are part of the Field Hospital, there is no room for error.

Dr. Merin believes that “Israel is unique in the size of its humanitarian assistance.” Explaining that Israel is “unique in [its] abilities to arrive very quickly to disaster areas,” he notes that in Haiti, within three days of the disaster, the Israeli team was already operating in the field. A rule of thumb for the Field Hospital unit is that within six hours of arrival, medical personnel must already be treating patients. Dr. Merin points out that “sometimes there is resistance of groups to come to disasters. Israel is willing to enter the unknown. You need to be mentally able to deploy quickly.” This type of improvisation, before, during, and after missions is “one of the more important [characteristics] to have.”

The Opening of the IDF Field Hospital in the Philippines

Before the arrival of the medical team, Israel sends out advance teams to report on the scope of the disaster. When discussing the quick response rate of the team, Dr. Merin stated, “Israel is not running into the fire, but we are also not waiting for the fire to die down. You have to understand that you can start to move before you have a clear understanding…We are gathering information as we go…during the flight.”

“For me, one of the strongest examples was Haiti. We left Israel when we had no idea what was going on. When [we reached] the airport [in] Port-Au-Prince, Haiti, the pilot said ‘We don’t know if we can land. Wait.’

“Some say don’t leave Israel if you don’t know where you are going to go. No – we are leaving Israel and if we need to land [elsewhere], we can land in the Dominican Republic…If we would have waited, we would have lost another 24 hours.”

Arriving with the unit are not just medical and rescue professionals, but a host of the latest technologies, some of which are not even available in the countries they are working in. To further add to the extraordinary efforts of the Field Hospital unit, all equipment is left behind, regardless of circumstances. After the devastating tsunami in Japan, the Japanese Health Ministry asked the Israeli team to best smartphones under 5000 leave their medical equipment. Why would Japan, one of the strongest economies in the world that could easily afford the equipment, ask to keep it? Dr. Merin explains that “at that point in time they needed the assistance,” no questions asked.

One organization, the LIBI Fund, helps “implement projects not covered by the Army’s regular budget.” Founded in 1980 by then-Prime Minister Menachem Begin, the LIBI Fund believes that “the IDF is a reflection of the entire society of Israel and deals with all the problems affecting the Israeli society.” In a regular military field hospital, most of the medical equipment is for adults and centered around trauma in battle. When asked about the work done by the LIBI Fund to raise funds for the IDF’s humanitarian efforts, Dr. Merin stated that money raised could be used to buy medical equipment not needed in war zones. When asked about the specific types of equipment the Field Hospital unit could use, Dr. Merin answered: “What equipment would we be happy to get? Equipment to treat civilians! We had in the Philippines 69 babies born within the two weeks we were over there. In Haiti, 16 babies were born. We don’t have baby incubators because you don’t put soldiers in incubators! We don’t have ultrasounds for women because this is not a unit that usually assists in labors. We don’t have equipment for pediatrics because it’s not usual.”

When speaking about the scope of the disasters and how challenging it can be to treat masses of injured people, Dr. Merin said, “What I find is when you speak about numbers in disaster areas, the numbers are out of context.” He further iterated that “you cannot save all.” However, upon reflecting on those numbers that can be helped, Dr. Merin brought up a very important lesson: “You aren’t treating this one patient. You are treating his family. The whole family surrounds him during treatment. It is not just 1,000 patients but rather 1,000 families.” Other than medical assistance, Dr. Merin believes that the presence of others coming to help in disaster zones helps people get back up on their feet.

“Coming from a foreign country to assist in these areas, you need to treat the environment of the disaster correctly. You need to get people to assist themselves,” explains Dr. Merin. This means assisting in efforts such as debris cleanup, reopening schools, organizing food deliveries, and bringing back electricity. In the Philippines, the mayor of Bogo told Dr. Merin that the Israeli team “gave us a wakeup call.”

The IDF Field Hospital participants are, explains Dr. Merin, “ambassadors [for] Israel.” While in the field, the unit wears their IDF uniforms. Recently, the IDF Field Hospital unit was in the news when Israel declassified information that along its border with Syria, the unit was helping treat civilians affected by the raging civil war. Dr. Merin made clear that Israel is in no way involved in the civil war. Rather, “this is a humanitarian crisis happening in front of our noses. Civilians are being injured, civilians with no political agenda.”

Diane Sawyer Impressed with the IDF Field Hospital in Haiti

When asked to reflect on his career as a doctor and the work he and his team have taken part of over the years, Dr. Merin shared a personal story to illustrate a strongly held belief. During the Holocaust, in a ghetto in Poland, all the Jews were rounded up and put on trains by the Nazis. One mother knew theGame Of Thrones Season 7 Online final destination of the trains: Auschwitz. With one last look at her children, a son aged 8 and a daughter aged 6, this mother threw her children out of the train. The children ran away to a small Polish village and there a young Christian lady hid these two children for the duration of the war. The war ended and the children survived. A few years after the war, with the founding of the State of Israel, the children made their way to Israel and began their lives here. The boy eventually got married and had three children. Dr. Merin is the second son of this boy who was saved by the kindness of the young Christian woman. Dr. Merin believes the story embodies a principle of his, a familiar saying in Judaism: “To save one person’s life is to save the whole world.”

The work Dr. Merin does with his team of the IDF Field Hospital unit is “a drop in the ocean.” It is impossible to save or treat every person affected by disasters. Even in routine life, it is impossible to save everyone. However, as Dr. Merin eloquently explains, “Every person you assist, you save his world and you save his family’s world.” As part of one of the “best medical units in the world to respond to disaster areas,” the world cannot thank enough the efforts Dr. Merin and his team go through to risk their lives to save the lives of others.