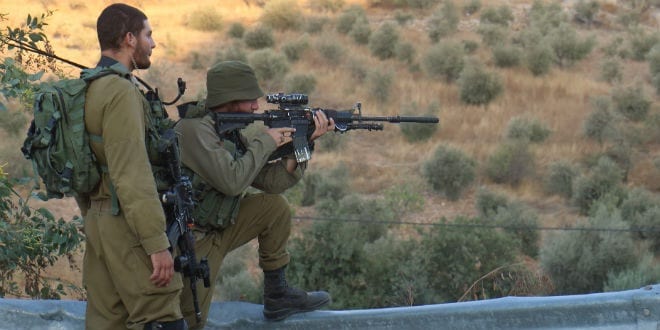 Israeli Defence Forces (IDF) along with the security forces of the Biblical city of Beit El and Border Police officers on Monday foiled a terror attack planned on the city. The terrorist was caught through their joint efforts.

“Army intelligence discovered the plot because the terrorist posted his intentions on Facebook,” a top member of Beit El security said. “Special IDF army forces entered the Arab village of Jilazoun, near Ramallah and next to Beit El, in the evening and caught the suspect.”

Modern Beit El, located in the Binyamin region of Judea and Samaria, was established in 1977 to strengthen Israel’s security in the area. It is mentioned in Genesis as the city from which Jacob had his prophetic dream. Jacob called the place “Beit El”, which means “House of God”. Located in the Binyamin Region north of Jerusalem, the mostly Orthodox Jewish town of 6,500 people has suffered from regular attacks from Palestinians, especially during the first and second intifadas. Following the creation of a bypass road, which helps travelers avoid their Arab neighbors, things quieted to a degree.

Yet as recently as the end of September, Beit El experienced gunshots fired at private homes from the contentious Arab village of Ramallah nearby. The Israeli government, due to the clashes, has allocated funds to build a wall around the community.

Beit El spokesperson Yael Ben-Yashar stated that the request to build a wall came after “the Palestinians attacked the community several times over the last year, including shootings at houses and using explosive devices and Molotov cocktails, which have started fires.”

These sentiments were echoed by Dr. John A.I. Grossman, Chairman of LIBI USA, an organization which supports IDF soldier welfare. “The Beit El incident proves that just because things appear generally quiet in Israel doesn’t mean that the enemies of the Jewish people have stopped their tragic ways,” he said. “This situation shows that Israel’s security forces must stay diligent always. We remain grateful for their bravery and dedication.”

Beit El has been at the forefront of the Israeli settlement enterprise since its founding. Israel’s government recently approved 300 additional housing units in the community, which has been denied expansion for ten years. However, since US President Donald Trump came into office and with the election of American Ambassador to Israel David Friedman, who has personally raised hundreds of thousands of dollars for Beit El, maintaining security in the area is considered crucial.

“LIBI USA will continue to support Israel’s soldiers in any way that we can in order to ensure that they have the tools, education and morale to hopefully stop terror in its tracks, as they did in Beit El, and provide Israel’s citizens with the security that everyone is entitled to enjoy,” said Grossman.