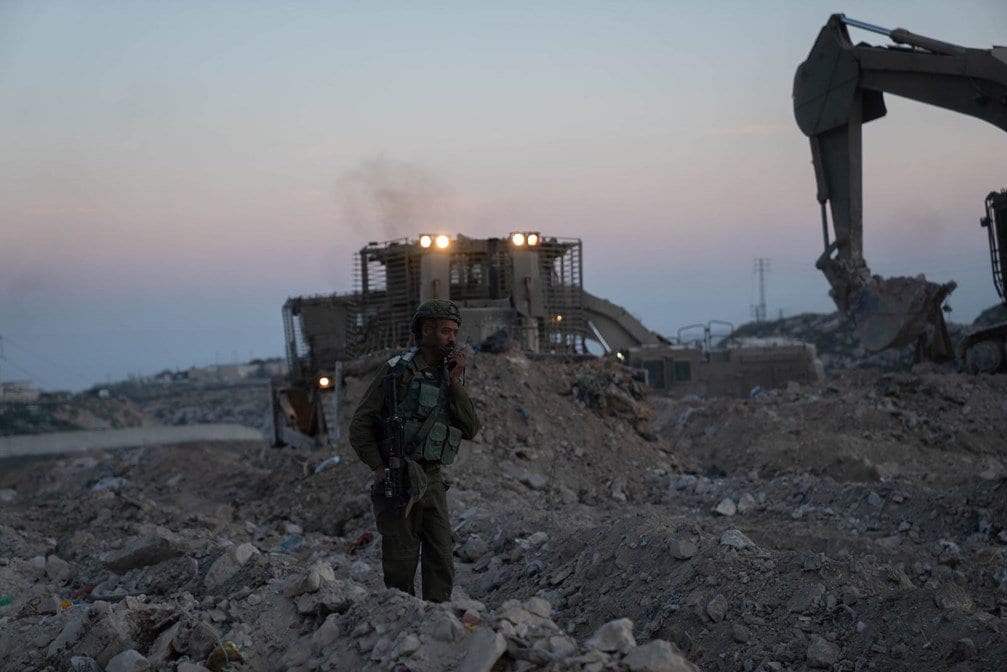 From engineering to demolition, learn more about the Engineering Corps’ Mechanical Engineering Equipment company stationed in Judea and Samaria in this exclusive interview with their unit commander. This interview was conducted after a recent successful mission in which the unit cleared heaps of trash that had once plagued defense walls in unstable areas of conflict in Israel.

“These garbage mountains are actually huge piles of objects, waste and construction materials, which Palestinian residents have been throwing near the separation fence for the past six years, which also creates some significant security threats for us,” said Yakir Bitton, commander of the Judea and Samaria based company. “The first risk is that the materials along the wall will put pressure on it and collapse it: A result that could lead to the intrusion of hostiles into Israeli neighborhoods.”

The second threat, said Bitton, occurred many times in recent years. Palestinian rioters are climbing the garbage mountains, providing them with a strategic position against the wall to throw Molotov cocktails, burning tires and stones at the security forces below. “You can actually see this section of the wall Black and burnt from most of the burning tires that have been rolled onto it.”

And so, every day for the past week, the tireless members of Mechanical Engineering Equipment Company have entered into the fray. With Israel’s esteemed Border Police protecting their operations from terrorists in the area, the unit has been able to remove huge amounts of debris and has thus prevented future harm to local residents and their security.

This important operation is just one of many that this IDF company is conducting throughout Judea and Samaria. The unit remains on a 24-hour standby year round, being that they “are not only responsible for the area’s day-to-day engineering needs, such as treatments and repairs of anti-aircraft guns,” explains Major Bitton, “but in virtually everything related to the capture of perpetrators after a terrorist attack and the demolition of strategic positions.”

“After a terrorist carries out an attack, a chase ensues, which often ends in the house where he is fortified. In that case, in order to prevent a shootout between them and IDF forces, we jump to the scene with heavy engineering tools and start destroying their refuge in order to prevent further casualties”

Even after the terrorists are caught by the security forces, the fighters of this crucial division of the Engineering Corps continue on an equally important mission: preventing future acts of terrorism. “For example,” continued Bitton, “after the terrible murder of Rene Shenrav, we received permission from Israeli parliament to demolish the homes of members of the terrorist cell that committed the injustice. We were divided into teams and, together, we destroyed all the targets in the span of a single night,” Major Bitton recalls.

“I remember that we could not use heavy tools to destroy one of those murderers’ homes, so we took hammers and broke wall after wall. It was exhausting labor but worthwhile” to ensure that no further acts of terrorism followed suit.

According to him, the feelings in tasks of this kind are particularly complex. “On the one hand, we show the strength of the IDF and achieve some deterrence by demolishing a terrorist’s house,” shares Major Bitton, “but on the other hand, we grieve knowing that our response was launched because an innocent person was murdered. I wish we would never have to demolish another house for this reason.”

“My brothers in arms are among the only ones who are always stationed in Judea and Samaria. They know the sector like the back of their hand and they can perform any task assigned to them in this sector because of it,” said Bitton proudly. “I owe all of my success in the field to the indomitable resolve of my comrades. We will continue to do whatever is necessary so that residents of Judea and Samaria and the surrounding area can sleep peacefully tonight.”