LIBI Lone Soldier Series: A Daughter Puts Her “Life on the Line and on Hold” 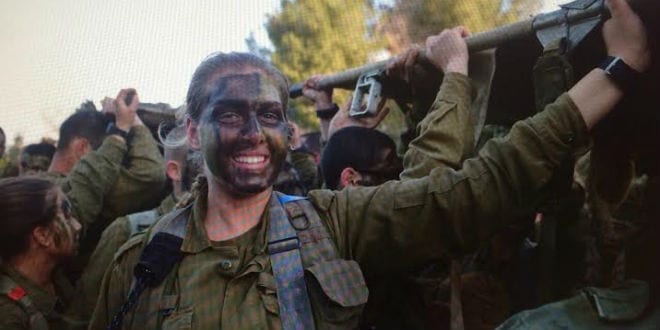 Today, there are more than 6,000 lone soldiers serving in the Israeli Defense Forces. A “lone soldier” is a soldier who has no family in Israel to support him or her. They range from new immigrants, a volunteer from abroad, an orphan or an individual from a broken home.

Hadrielle Galfand, 20, grew up in Philadelphia, PA and is a graduate of Lower Merion High School. Gelfand is currently serving in the IDF Artillery Corp and spoke with LIBI and Breaking Israel News about her decision to leave her family and friends behind to become a defender of the State of Israel.

When did you begin to develop a connection to Israel?

I lived in Israel from the ages of 3 to 4 with my family while my father was studying at rabbinical school. When we came back to the US, I attended Jewish day school and had a terrific Zionist experience through my teachers and communities.

When did you enlist in the army?

Why did you decide to join the IDF?

My parents know that it is not easy and are very supportive. They love to brag about me and what I am accomplishing

How often do you see your family?

My mom came in March for my swearing in ceremony and my father is coming in the summer.

Why do you feel your service in the IDF is important?

I think it is important, especially as a lone soldier, to earn the life I want to create here. I want to give back to the country that has given me so much, and the army has given me a way to do that.

Have you had a moment so far in your service that has been especially meaningful?

One moment was after finishing our overnight hike at the end of basic training. It is a 26 kilometer hike that we walk and hike overnight. We finished just as the sun was rising and was the perfect transition into my life as an IDF soldier.

Chaim and Kelly Galfand, parents of Hadrielle, shared with us their thoughts on having a lone soldier daughter in the IDF.

How did you feel when your daughter told you that she would be joining the IDF?

Proud! And if anyone wonders why “worried” isn’t the first thing out of our mouths, it’s because the IDF will look out for her just as she’s helping to look out for the citizens of Israel. We feel parental pride that Hadrielle’s chosen a worthy goal and is pursuing it — and we feel added pride as we see her contributing so tangibly to the continued building of the Jewish state.

Natives and immigrants to Israel study, work, or volunteer in a variety of ways, and they’re all essential contributions to Israel’s future, yet there’s something powerful in Hadrielle making the statement that Israel’s something’s for which she’s willing to fight.

With Israel under constant threat, how do you feel as parents knowing your child is putting her life on the line?

I don’t think we ever imagined any of our children first choosing to be a soldier and secondly choosing what country to fight for. We can only see our children serving in the IDF because they believe it is needed most here as the only democracy in the Middle East. Hadrielle is so passionate and strong on her beliefs in the existence of Israel, is it no surprise that she chose this path.

As her parents, what do you think Hadrielle’s biggest struggles have been serving as a lone soldier?

I think Hadrielle’s struggle is the same as many lone soldiers – always being on.  When she’s off base, she’s still working to master the language, get her bearings in new surroundings, maintain contact and communication with the tiny family we have in Israel (who have been amazing!) and create a real bond with her adoptive family, while also maintaining ties with her friends and family in America. Thankfully Hadrielle’s aunt and uncle have welcomed her into their family and provide an essential support without which this process would be profoundly more difficult.

I think most Israeli soldiers can really shut off the army and relax when they go off base because they have family and friends who have experienced the army first hand – they get it. Hadrielle is still defending her choice to friends and family back home who want to support her but still ask why Hadrielle chose something so difficult, demanding, and high stakes.

When I last visited for Hadrielle’s beret ceremony, I saw Israelis who also seemed baffled that she would chose something for which they are drafted.

What idea would you like to convey to people around the world about lone soldiers, and specifically about your daughter?

I think it has been shown since before Israel became a state that Israel needs lots of friends. Supporting the IDF is always needed from all around the world and it brings great comfort to know our daughter has that.

Partner with LIBI and Hadrielle in order to support her mission as a female IDF soldier in the defense of Israel. Click here to show your support.