LIBI Lone Soldier Series: A Young Woman’s Fight to Impact the Future of the Nation 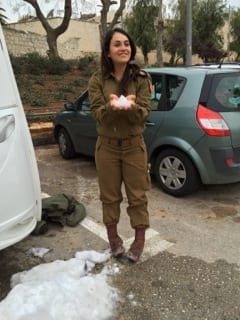 Today, there are more than 6,000 lone soldiers serving in the Israeli Defense Forces. Lone soldiers join all units of Israeli military. Most lone soldiers who enlist in the IDF are highly motivated to serve and protect Israel.

Tal Dover, 20, grew up in Miami, Florida, where she graduated from West Broward High School. Dover is currently serving in the IDF as a lone soldier, where she holds the rank of Private in the Arayot Hayarden (The Lions of Jordan) Unit.

Dover spoke with LIBI and Breaking Israel News about her decision to leave her family and friends behind to become a defender of the State of Israel.

When did you begin to develop a connection to Israel?

I have always had a connection to Israel because my parents are Israeli. We would spend our summers here. I knew I wanted to eventually live here, but I never really thought about joining the IDF until I was 17. My father pressured me to finish my degree and then make aliyah, but I knew my place wasn’t in America. I belong here, in Israel.

When did you enlist in the army?

It is really hard for them. They are proud of me, which gives me a lot of strength. My dad loves to talk about the fact that I am in a combat unit. He brags about me.

How often do you get to go back home and see your family?

The last time I saw them was 8 months ago before I made aliyah. My dad got tickets to be here for my beret ceremony in June, along with my mom and brother. I am so excited!

I was also recently told that I was chosen to attend a commander’s course in July that I am really excited for. It will be nice to have an influence on the next group to draft.

Why did you chose the unit you are in?

I came through Garin Sabar and I knew I wanted to be a combat soldier. If I was to serve in the army I always wanted to do it to the fullest. I was told about this unit a week before my draft. It is a brand new unit and I was in their first draft! I chose this unit because we are based on the Jordan border and it is an opportunity to create change.

Have you had a moment so far in your service that has been especially meaningful?

The first time I visited the Kotel (Western Wall) in uniform was specifically meaningful. I cried like never before and my connection to the people and the land was strengthened. I knew I was doing what I was meant to do.

On my draft day, I had more people at my draft than all the other regular soldiers. My draft was in Tel HaShomer, and people drove from Haifa and the north just to support me. Even though my parents weren’t there I felt so much support.

Many people don’t know that soldiers are oftentimes required to buy some of their own military equipment. Is there anything your unit specifically needs?

The vests the army gave us are not meant for women’s bodies. They do not properly fit us or support us, so we could benefit a lot from more fitted vests.

What is one message you want to tell the world about the importance of being an IDF soldier?

What I am doing is hard. But it is so worth it. It is so important to be here and make an impact on my future, the army, and the Jewish people.

Partner with LIBI and Tal in order to support her mission as a female IDF soldier in the defense of Israel. Click here to show your support.