Lone Israeli Soldier Laid to Rest Among Throngs of Mourners, Heartbreak and Praise 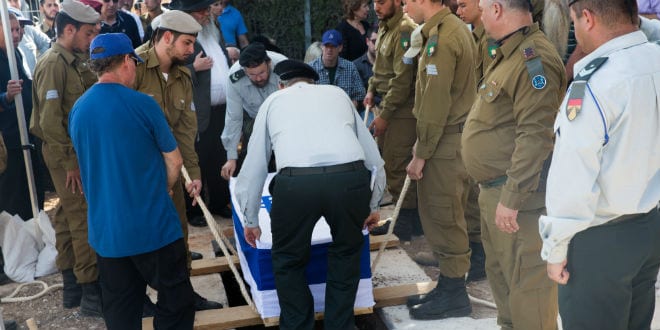 Lone Israeli soldier Shlomo Rindenow was laid to rest on Monday in an emotional ceremony attended by hundreds. Many of the attendees had no personal relationship with the Sergeant himself. Rather, they were fulfilling the Biblical Talmudic dictate that “All of Israel is responsible one for the other.”

“Our hearts go out to the Rindenow family at this very difficult time,” expressed Dr. John A.I. Grossman, Chairman of LIBI USA. “Lone soldiers are particularly close to our hearts as these brave men and women leave the comforts of their homes outside of Israel to serve and protect the Holy Land and its citizens.”

Rindenow, a United States citizen from New Jersey, volunteered to serve in the Israeli army. He was killed on Sunday when a hand grenade exploded during a routine patrol. First Sergeant Hussam Tapesh from the Druze city of Beit Jan was killed in the incident as well. Three other soldiers were injured in the blast, with one still in serious condition. Army officials are investigating the circumstances behind this unusual tragedy.

Earlier Monday, Rindenow’s family called on the Israeli public to attend his funeral. “For most of the course of his [army] service my brother was alone,” stated his brother Jeff. “He volunteered to the army because he wanted to be a warrior. We are requesting that at least for his final departure he won’t be alone.”

Rindenow, who was twenty at the time of his death, was buried in the Netzer Hazani-Yesodot cemetery near Israel’s southern city of Ashdod. The Rabbi of Netzer Hazani eulogized him by saying, “We Israelis have the advantage of being born here, but you had the merit of both being born here and making aliyah [choosing to move to Israel]. This reflected the love you had for Israel, which compelled you to leave the US to volunteer to defend the Land of Israel.”

At his funeral, Rindenow, one of eight children, was eulogized by his siblings. His sister Yocheved shared, “You were wise like your namesake, King Shlomo, wise beyond your years. More mature than all of us. You taught us how to live with a pure and open heart.”

His brother Jeff noted, “Today is a day of tragedy for the family, for the army, and for the Jewish nation everywhere. Shlomo joined the army to follow in the footsteps of four brothers and two sisters who did national service [in Israel]. Shlomo, you always smiled, you always were there to help whoever needed it. You could have done a shorter term of service as part of the diaspora volunteer program, but you decided to do the full three years. You will always be an example to all of us, to your brothers and sisters, and everyone who knew you.”

“Sergeant Rindenow’s death is particularly emotional to the lone soldier community,” continued Grossman. “He is the fifth lone soldier killed in the past two years alone. We must do all that we can to strengthen all of our IDF soldiers, but especially lone soldiers who could have stayed where they were but rather chose to defend Israel.”