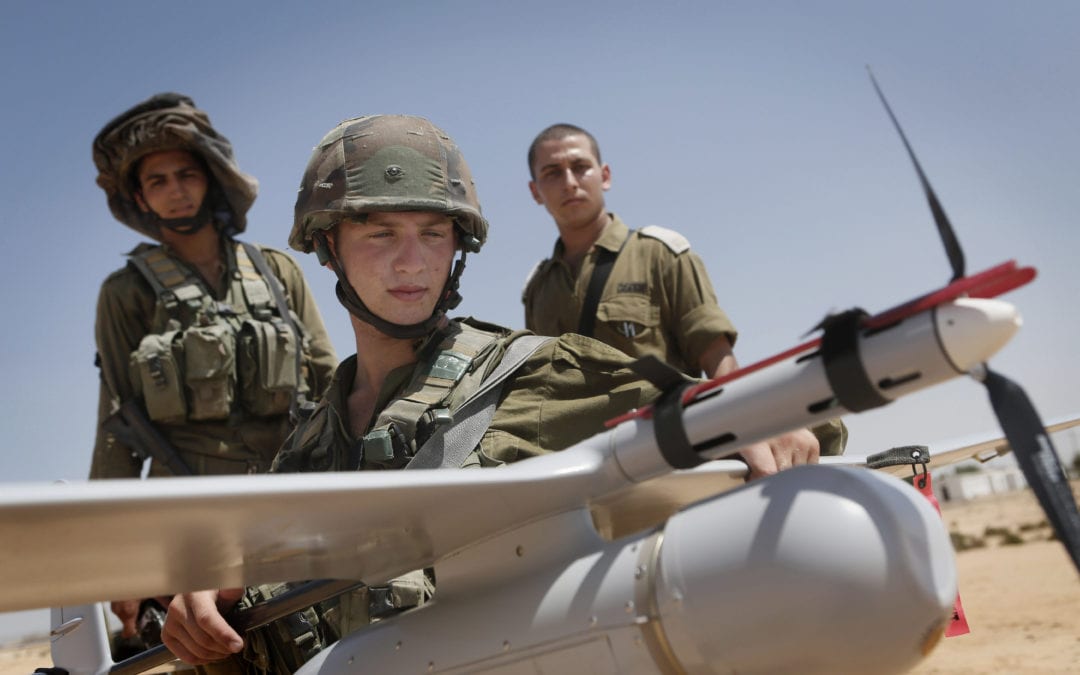 Israel is increasingly suffering from a new terrorist threat; drones. A drone is a pilot-less radio-controlled aircraft used for reconnaissance or bombing enemies. Hezbollah, Hamas, Islamic State and other Islamic radical all have drone programs, posing a continuous threat to Israel’s security.

Recently, a quadcopter drone from the Gaza Strip landed in southern Israel. This is one of many which have plagued the holy land in the past year. The Israel Defense Force (IDF) is responsible for finding and capturing the covert drone and research its mechanics and purpose.

“Israel is actually a world pioneer in the use of military drones,” explained Dr. John A.I. Grossman, Chairman of LIBI USA, the official welfare fund of the IDF. “Though we are proud that Israel is a global leader in drone technology and the use of these systems to protect the Holy Land and others from terrorism, it is disheartening that Israel’s enemies are increasingly using this same system for evil.”

Israel has been using drones since the 1980’s. It is the first known country to utilize this advanced system to coordinate strikes on the battlefield.

Tal Inbar, head of the Space and UAV Research Center at the Fisher Institute for Air and Space Strategic Studies in the Israeli city of Herzliya, explained to JNS.org that there are two types of developing enemy threats levied on the Holy Land, commercial drones, which are easily controlled, very accurate, and can receive clear flight paths, and the larger, fixed-wing, unmanned aerial vehicles (UAVs), which are known to be part of Hamas and Hezbollah arsenals.

Inbar shared that the Syrian Islamic State has already used commercial drones to drop a variety of explosives on targets. “If they enter a protected area, they could disrupt something like air traffic,” he said. “If you’re running Ben Gurion International Airport, and suddenly you see two to three quadcopters landing, you wouldn’t be giving anyone permission to take off or land.”

The IDF remains diligent in its fight against drones spying on Israel or even shooting rockets. “We know that Hezbollah, Hamas, Islamic State and other radical Islamic groups are developing and using drones,” continued Grossman. “Some can even guide rockets that can reach a few miles away, which is a serious threat to the civilized world and certainly to Israel and keeps our IDF on full alert at all times.”

Haim Haviv, head of the Integrated Electronic Warfare Systems for Mountains Terrain program at the Israeli defense company Elbit Systems, told JNS.org, “We can say that capabilities once reserved for big organizations and militaries are now in the hands of smaller groups like Hamas, ISIS (Islamic State) and others [using] high-performance commercial drones to gather intelligence and launch strikes at people and vehicles [on the ground.]

Drones with intelligence gathering capabilities have become so commonplace that they are purchasable on eBay. Enemies can make relatively simple adaptations turning the “toy” into bomb dropping weapons. “This is what happens now,” said Grossman. “It’s difficult to control, yet, must be watched.”

Elbit sells a defensive countermeasure, called ReDrone, which can be used against terrorist drones. ReDrone detects drones through the use of sensors, and then disrupts their communications and navigational systems, blocking radio signals and satellite transmissions confusing their flight path.

Haviv believes that commercial drones will become involved more and more in security incidents. “The future battlefield is becoming increasingly complex,” Haviv said, noting that it will be filled with autonomous drones, some of which have the ability to fly like a flock of birds in formation.

“As our enemies become more sophisticated, the need to better protect and educate Israel’s soldiers also increases,” said Grossman. “LIBI USA is there to support IDF soldiers in any capacity that we are needed to ensure that Israel’s army is the best in the world.”