Soldier Stabbed In Back After Saving Civilian 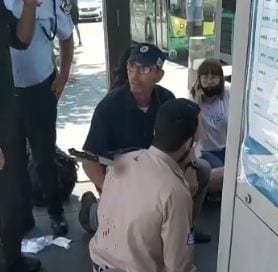 A soldier was stabbed earlier today on the streets of Jerusalem when he intervened to protect a civilian who was being attacked by a terrorist. The attack occurred on Haim Bar-Lev Boulevard, near Israel’s parliament and other government buildings. The soldier was stabbed in the back when he arrived to help the civilian but, thankfully, is in moderate condition. Nearby police officers shot and killed the 17-year-old East Jerusalem resident who perpetrated this horrific act of violence. Police Commissioner Yaakov Shabtai and Minister of Internal Security Amir Ohana arrived at the scene shortly afterward.

Both victims were speedily brought to Hadassah Hospital on Mount Scopus. Doctor Shadin Salma Yosef, director of the emergency department at Hadassah Mount Scopus, told news outlets that “two injured people in their 20s came to the trauma rooms of the emergency department with stab wounds to the upper body, mainly to the back… they arrived in fair condition and conscious, and emergency medical and surgical teams provided them with primary care.” He went on to further elaborate on their condition, stating that “after further tests, penetrating injuries were detected in the lung area of one of the victims… there is fear of damage to blood vessels.” The director noted that, at this stage, both patients’ lives are thankfully “no longer in danger.”

Magen David Adom paramedic Sigalkt Mizrahi was one of the first to arrive at the scene of the attack. “We arrived and saw two wounded with stab wounds in their upper body,” she recounts, “both were conscious.” She and her team immediately began treating the victims, providing them with “life-saving medical care that included bandages to stop the bleeding… then we quickly evacuated them to the hospital.”

The courageous policemen who neutralized the terrorist said later in an interview that he “arrived at the light rail station on Ammunition Hill and” that he “rapidly identified a terrorist who stabbed a civilian several times in the back. “I ran after him,” he continued to recount, “and, when I was within range, I fired several bullets at the terrorists until I was sure that he no longer posed a threat.” The man concluded that “we will continue to be here to protect the civilians and our homeland; I wish a speedy recovery to the wounded.”