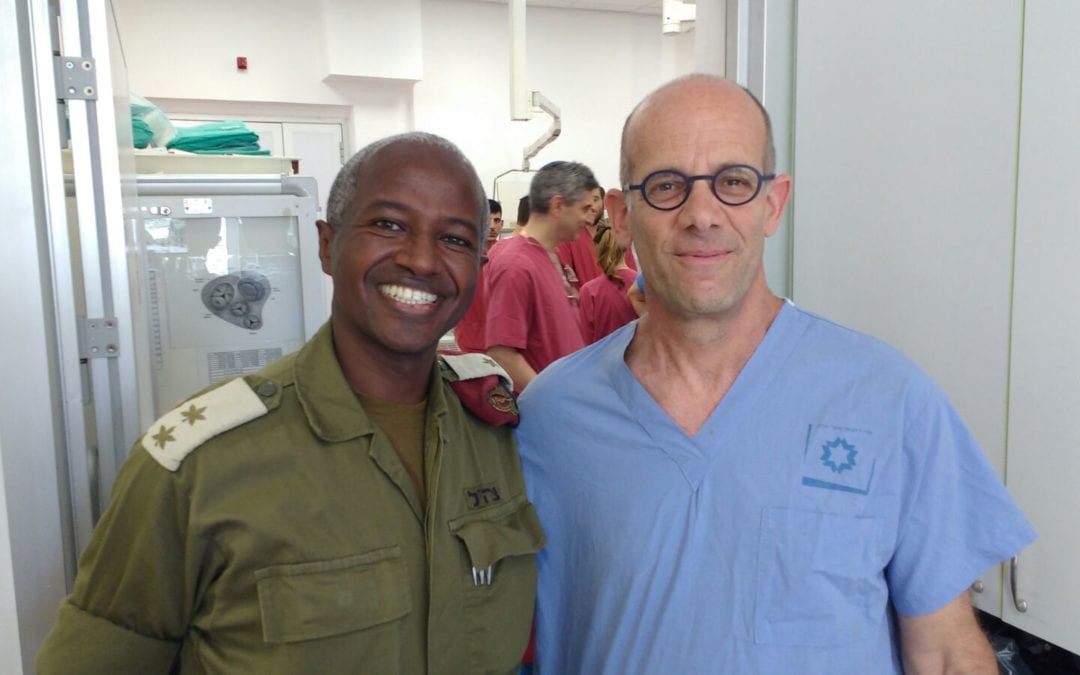 For the first time in Israel’s history, top surgeons throughout Israel and the Israel Defense Force (IDF) gathered to learn a new medical technique which stops bleeding in cases of trauma without an incision. Trauma specialists from South Africa, the US and Sweden came to the Holy Land to teach and demonstrate the groundbreaking procedure. The workshop took place on Kibbutz Lahav in Israel’s southern region, with eighty medical personnel in attendance.

“LIBI USA is honored to have sponsored this trailblazing three-day workshop which will, no doubt, save lives in Israel and worldwide,” shared Dr. John A.I. Grossman, Chairman of LIBI USA, the official welfare fund of the IDF. “It was also a unique opportunity for medical professionals to unite in Israel, as saving lives is a Jewish and Israeli priority.”

Dr. Grossman referred to the Biblical commandment of pikuach nefesh, the preservation of human life. This commandment, derived from the Book of Leviticus, is so basic to Judaism is that it takes precedence over all others.

“So you shall keep My statutes and My judgments, by which a man may live if he does them.” (Leviticus 18:5)

The Talmud emphasizes that one should live by the commandments, not die by them. One who is zealous in saving a life is praised and one who hesitates to save a life is considered as one who has shed the person’s blood themselves, which the sages describe as “piety of madness.” In fact, to save and preserve a life, one must desecrate the Sabbath and even eat on the fast day of Yom Kippur, the holiest day of the year.

“This is a new technique which requires specialized training in a controlled setting to master,” explained Colonel (res.) Dr. Ofer Merin, Director of the Trauma Unit and Preparedness of Mass Casualty Events at Shaare Zedek Medical Center in Jerusalem and Commander of the IDF Field Hospital and General Staff’s Surgical Hospital Unit. “We are truly grateful to Dr. Grossman and LIBI USA for funding these life-saving workshops as simulated trauma scenarios with the use of REBOA are crucial to master this new technique.”

Resuscitative Endovascular Balloon Occlusion of the Aorta, or REBOA, is used when a person is rapidly bleeding to death. It involves the placement of a flexible catheter balloon into the aorta to control hemorrhaging in traumatic injuries and then inflating the balloon, which stops the bleeding.

The head of the Trauma and Combat Medicine Branch for the IDF, Lieutenant Colonel Dr. Avraham Yitzhak, was part of the team of experts learning and assessing the effectiveness and practicality of using REBOA on Israeli soldier trauma victims. “This important workshop united civilian and army surgeons to train in the cutting edge REBOA technology. Because of this workshop, the IDF might have an additional way to save lives,” Dr. Yitzhak told Breaking Israel News. “We are grateful to LIBI USA for sponsoring these days.”

Dr. Yitzhak also discussed the IDF’s commitment to pikuach nefesh. “IDF physicians have three levels of oaths they take concerning the saving of lives,” he said. “We have the Hippocratic Oath, which every doctor in the world is obligated to uphold. In addition, we have the Oath of Maimonides and the oath of the Israeli Medical Corp, My Brother’s Keeper.”

The essence of the Oath of Maimonides, named for its originator, a 12th century scholar of Jewish law and philosophy, is to watch over the life and health of God’s creatures without egoism.

The essence of the Israeli Medic’s Oath is that medics will give everything, including their own lives, for the State of Israel and its people and will treat “friend or foe” alike, in all conditions, and never leave anyone in the field.

“In Israel, we tend to be busy with trying to live fulfilling lives or dieing at the hands of our enemies,” shared Dr. Yitzhak. “IDF medics risk their lives to give correct care to everyone, including wounded Syrians across our border, humanitarian aid to people all over the world and even medical care to our enemies.

“Unfortunately, we haven’t taken the time and aren’t good at explaining to the world how ethical, moral and valuing of life we are. This workshop helps to build that knowledge worldwide and gain life-saving skills in addition.”