Updates from the IDF 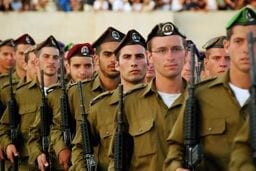 On Tuesday night, an IDF officer was lightly wounded by shrapnel from a shot that was fired from the Egyptian side of the border. The officer was treated on the scene and is stable. Arab media has reported that the shot came during clashes between the Egyptian Army and smugglers, and the IDF believes the shot was in fact an accident and not a hostile provocation.

A drone was spotted flying by the border of Lebanon and was promptly brought down by the IDF. The purpose of the drone is unclear. The Lebanese Government claimed it belonged to a Lebanese singer who was in the middle of recording a music video to be released on the anniversary of the Second Lebanese War. This explanation doesn’t explain why the drone crossed into Israeli airspace and it comes amidst a recent wave of attempted infiltrations from Lebanon.

A second wave of COVID-19 is in full swing in Israel and according to a report conducted by the IDF, it will likely stick around for a while. With the virus expected to stick around, Gabi Ashkenazi, Israel’s Foreign Minister, has openly stated that the management of the virus should be moved from the Health Ministry to the IDF. His reasoning is that the IDF is well prepared and trained to handle crisis situations as well as natural disasters – and the Homefront Command is the best-equipped unit to help Israel get over the pandemic.

Meanwhile, the IDF has faced a spike of their own in COVID-19 cases – as of this writing their have been a confirmed 886 cases within their ranks. In addition, there are 7,558 members who are at in-home quarantine.

Many IDF exercises have been canceled recently due to the many problems that have cropped up in wake of the novel coronavirus, but there seems to be a big one in the works. This Tuesday night, the 22nd of July, a large exercise is planned in the western Galil area on the Coast. It will last through the night until Wednesday morning. There will be explosions and use of flares during the activity, whos objectives were not disclosed, and swimming will be prohibited all along the coast in the area.